On The Up…Vitae Sports chart Fynn Hudson-Prentice’s amazing rise in the game. 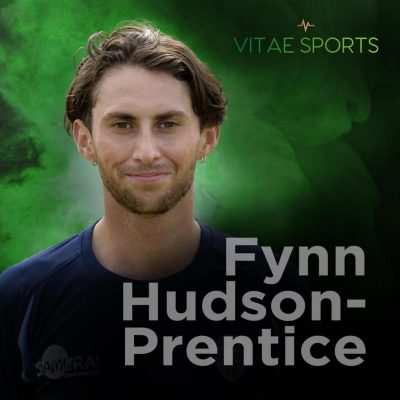 Derbyshire all-rounder Fynn Hudson-Prentice may only be 24 years old, but his cricketing story is already a special one.

Born in Sussex, he joined his home county aged 10 and moved steadily through the age groups before going on to sign his first professional deal.

According to the man himself, though, it wasn’t always clear whether he was going to ‘make it’. Not until he reached his mid-teens, anyway.

“It was great growing up in Sussex and playing for the county age group sides” said Hudson-Prentice.

“It was my dream since I was very young. I’d been inspired by Freddie Flintoff and the 2005 Ashes team back when I was only nine years old. I never really excelled until the age of 14, maybe 15. I was never ahead of the group – probably behind, if anything. But, when I hit 14, 15, I started scoring hundreds regularly and I was playing two or three years above my age.

“I joined the academy when I was 15 and then signed my first pro deal when I was 18. Back then, I couldn’t believe what was happening, but it was great.”

It wasn’t the simple matter of getting into the professional game and staying in it for Hudson-Prentice, however. After two years, he was released by Sussex as a 20-year-old, and was left questioning whether cricket was the career for him.

“I had a bad season my second year on the staff” said the all-rounder, who boasts an impressive bowling average of 25.80 in county cricket.

“My first year was okay. I played a few first team games, scored 40-odd in my second List A game. So, it was alright; I started off pretty well.

“But then second year, when I was expected to kick on a little bit, I really stagnated. I got a bad back injury, a stress fracture, so I couldn’t bowl for the whole season. I was playing as an out-and-out batsman, and then I went into the back end of the season fighting for a contract.

“We lost a couple of our key batters in the first team to injury – I got thrown in to open the batting, and it just went terribly. I averaged six or seven in those games at the end of the season and then they (Sussex) just said they hadn’t seen me progress to where they wanted me to.”

Then it was time for a break.

“I lost my love for the game” admitted Hudson-Prentice.

“That year that I got released by Sussex, I went over and played in Australia and wasn’t really enjoying my cricket as much as I did as a kid. Obviously, as you start playing as a youngster, the reason you play is to enjoy yourself, and I completely lost that.

“So, I took that year out, had a good season playing league cricket, won the Sussex league, had a good time with all the boys, and then Steve Kirby from the MCC Young Cricketers rang me up at the back end of the season. He said that he saw that I wasn’t playing any second team cricket and asked me if I wanted to go and play a couple of games towards the back end of that season for the Young Cricketers.

“In terms of a steppingstone, it was great; we had a good set up there. It was good just to get out of home, to be honest. It teaches you how to pretty much raise yourself and do everything for yourself.

“We had a programme where we had to work 20 hours a week in the winter, and then that would fund our 20 hours of training. That was a good side of it – you’re pretty much working to play. Then, obviously, you get the chances to play against all the other county teams. It was really good.”

It’s fair to say that Hudson-Prentice’s time with the MCC allowed him to rediscover his love for the game. So, when Derbyshire came calling in the summer of 2019, it was a no-brainer.

“We played against Derbyshire in a pre-season friendly last season; I scored a 50 in that game, took a couple of wickets.

“Steve Kirby moved up, and he and Mal Loye were on the phone to Ajmal Shahzad from the Young Cricketers asking if I was able to go and trial with them for six or seven weeks, so I was very positive straight away.

“It was just that one year, I think. I fell out of love, and when you get that back it’s a lot easier to push yourself to do things that you might not do if you didn’t have the love for it.”

And, since he’s found his way into the first team, he hasn’t looked back.

“It’s a tight knit, small squad. I feel like sometimes you could go into bigger squads and you don’t really see some of the players because teams are quite separated, but our first and second team are quite close knit, so everyone knows each other – I’m really enjoying the environment.”

The allrounder helped make history in his first season with the club, too. The county’s T20 team reached Finals Day for the first time ever, and Hudson-Prentice insists it was a campaign he’ll never forget.

“Personally, it was completely out of the ordinary” added Hudson-Prentice, who picked up 11 wickets during the competition.

“I wasn’t thinking I was going to play that much in the T20s but Corky (Dominic Cork, Derbyshire head coach) was like ‘you’re going to play most of the competition, if not the whole thing’, so he gave me a lot of confidence.

“In terms of the team, it was great. I think the first four or five games we were rock bottom of the table. We didn’t really know our method and our overseas players both pulled out with injuries, so we ended up with a bit of a different structure to what we had initially planned.

“We found a method that worked as a team that everyone knew their role in the side. Come game seven, we went on a great winning run, which led us into Finals Day.

“We got there, and I think it was almost like the pressure was off – Derbyshire had finally got to Finals Day!

“Everyone was really up for it, but it just didn’t seem to piece together on the day, which is unfortunate. We’d put so much effort into the last six or seven group games, I don’t know if maybe we were a little bit tired going into that mentally, having almost got our finals out the way, because we had six back to back trying to get there.”

Derbyshire lost by 34 runs to eventual winners Essex in the semi-finals.

“(It was) very disappointing” admitted Hudson-Prentice.

“For me it was a bit surreal, because it was my first season and we’d already got to Finals Day. But, as a side, everyone was really disappointed afterwards.

“We started very poorly (against Essex) and were behind the eight ball from the go. I think we lost the game in the first four overs with the ball; we’d gone for something like 45 off four overs on an average pitch, which killed us.

“But the day was great. I’d never been to a Finals Day, so it was great to be there and around it. It was good to see what it was like, and hopefully we can get a taste for that again soon. The squad is massively ambitious to do that again.”

In terms of his ultimate ambition, too, Hudson-Prentice wants to go to the very top.

“You want to play international cricket” he added. “It’s always going to be your ambition, but there’s obviously how you go about doing that.

“I think if you’re winning games as a team then you get noticed more, so it’s more about us trying to win now as a club.

“I know they (England) have tended to look at Division One a bit more with the players they have brought into international cricket, but, as a club, we are looking to push to get back into Division One anyway – we’ve got a long-term plan over the next two or three years to try and push towards that.

“Hopefully that will push my name forward to play for the England Lions at some point in the next couple of years, and then I can try and push towards playing test cricket.”

The allrounder does have a soft spot for the old enemy, however.

“I also think I’ve always dreamt about playing in the Big Bash growing up, to be honest. I love the country of Australia, so I would love to play in the Big Bash at some point too.”