One to watch! Yorkshire paceman Ed Barnes – in profile! 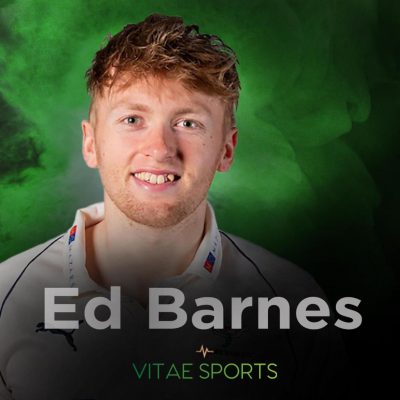 Ed Barnes is a talented right arm seamer tipped for a big future.

At just 22 years old, the Yorkshire youngster has plenty of time to develop into a star. He’s had a great journey and some brilliant experiences so far, but one thing is missing for him: his first team debut.

“When there’s quite a few people ahead of you, especially at a county like Yorkshire, it is very tough” said Barnes.

“You sometimes feel like, because of the pedigree of players ahead of you, it’s tough to try and persuade the coach that you’re going to offer more than they can. That’s the hardest bit.”

With the likes of David Willey and Duanne Olivier ahead of him in the pecking order, Barnes joined Sussex on loan last season to not only assist in their One Day Cup campaign, but to get some much-needed first team experience in order to impress those at the top at Yorkshire.

“It was all very quick, really” mentioned Barnes.

“We were mid-way through a three-day game. I got the call from the director one night saying to pack my bags if I wanted to go in the morning!

“They had a game on the Saturday against Middlesex. I was never going to play that game, but they said that the chances were I was going to play a bit later in the tournament.”

Unfortunately, things didn’t go to plan for Barnes. He didn’t make a first team appearance whilst in Sussex, and was left still pleading for his debut.

“They won that game against Middlesex” said Barnes.

“Then they kept pretty much the same team throughout the tournament. They played well, but they lost the last three and just needed to win one to qualify.

“Keeping the same team was frustrating, but they were bowling well so it’s tough to argue with it really.

“I learnt a lot about myself; the fact that you’re going there, you’re living in a one-bed flat, nowhere near home. It was brilliant to be fair, it was a lot different because in Yorkshire you have people who live miles away from the ground, whereas in Sussex everyone lived literally within a 10-mile radius.

“I learnt to trust in what I did to get me there. It works a bit differently with how they train, and I probably got succumbed into that a little bit – an example would be that at Yorkshire I’d bat every day in training, even if it’s just for 10 minutes. Whereas at Sussex, it was very much that no one really batted.

“So, it was tough to keep to what got me to where I was. But you don’t want to step out of line or anything, so I just learnt to stick to what got me there, I guess, which was probably the most important thing out of that.”

Before the coronavirus pandemic, the plan was to do a similar thing this campaign, too. Barnes simply wants a chance to prove himself.

“We both agreed, myself and Yorkshire, that, if I went out on loan, it would be the best way for me to show them that I’m good enough.

“If I went to a Division Two club and played a bit of Championship cricket, that has a bit more weight than if I did well in the second team.

“That was going to be the way that we were going to go this year, but lockdown has obviously happened. But, going forward, that’ll be the plan.”

It would be a big move for the youngster. Of recent years, it’s been second eleven cricket, although Barnes did admit it’s been a process that he’s enjoyed.

“It’s still professional, but you know a lot of the guys you play against just from crossing paths earlier in your career. The majority of you are 21, 22, so it’s a good atmosphere.

“It’s tough because you have such a mix of players. Usually every week in the second team you’d have one or two of the first teamers who are coming down, you’ll have one or two of the academy lads where it’s all new for them, and then you might have five or six of you like myself, who have played it for the last few years and know what it’s about.

“I think as the years go by you get a different role in the side and a bit more of a responsibility to lead when you’ve played a bit more. There’s a bit more emphasis on helping the younger lads and helping them through whilst also trying to concentrate on your game.”

“I remember when I was about five, I was in a cricket camp at my local club. My dad took me to one of those and I loved it – although I didn’t always understand it!

“I worked up the age groups. You play a bit of district cricket, you eventually get picked for Yorkshire schools, and it kind of progressed from there. It has always been a dream. You look back on primary or secondary school and think about your dream job; it was cricket.

“Since I left sixth form, I went into full time training with Yorkshire. When I started it was really relaxed – even four years ago I thought it was more relaxed in the winter.

“Summer was tough, though. We joined up with the squad, and obviously you’ve got some of your big names, so it’s harder to integrate yourself, but, as the years have gone by, they become your mates and it’s been brilliant.”

And, since the cricket did become a reality, Barnes hasn’t looked back.

“It’s literally like playing with your mates” he said.

“We’ve got quite a young squad at Yorkshire the minute, and in terms of the social side and getting on with everyone it couldn’t be better. We are all really good mates.”

A personal highlight was representing his country, England, at youth level.

“We had Sri Lanka in a home series, and it was so good” said Barnes.

“Some of their cricketers and the way they play the game – it’s just completely different to us.

“I think it shocked a lot of us really how good they actually were to be honest, but the whole experience was unbelievable. I was the only Yorkshire player, so I didn’t really know many of the lads, but you all get to know each other more and more as the series goes on, and you make mates for life.

“It was my first taste of playing professionally, because I was only about 17, still at school, and it was a really good taster.

“We had a really good squad; we had Sam Curran, Pope, Tom Moores played for a bit; we had a brilliant team looking back. Two of those have played test cricket and they’re still really young.

“It was one of my favourite spells of cricket enjoyment wise – I definitely look back at it with fond memories. I still have all the kit now, and I wear it round the house!”

It seems as if Barnes’ time in the England youth set up has given him a buzz for international colours, too.

“I try not to look too hard into the future” admitted Barnes. “But, for me, test cricket is the absolute pinnacle.

“As soon as I break into that first team and I’m playing consistently, I just want to keep making the steps up. No one really knows where cricket is going to go; is it going to be all white ball in 10 years, or will red ball take a focus?

“To play test cricket, however, would be amazing. That would be more of a dream of mine than, say, playing in the Big Bash.

“I would absolutely love to play in an Ashes – that’s the end goal. I try to focus on red ball when I practice, because that’s what I enjoy more – I love the grind and the old school four or five days.

“As I say, no one knows where the game’s going to go, but, as of right now, that’s the aim, definitely.”

But ignore England for now. Ignore a potential loan move. At Yorkshire, now and for years to come, Barnes sees trophies.

“We went through that really successful period in 2015, winning the County Championship, but then the team changed a bit.

“We went through a bit of a transition period, everyone kept calling it. We started bringing in young lads, and I reckon that it was this season onwards that we had the expectation to win trophies. It was the first year where we were like, ‘we should win a trophy with our squad’.

“It was looking like we were going to have Rooty (Joe Root) back for the first six games, obviously we’d signed Ashwin and Maharaj, two unbelievable spinners, and the younger lads have got better.

“We’ve got a great squad and we should be competing for the next five years at least. At team meetings you look around and think you’ve got an unbelievable squad. So, I feel like we’re definitely through that transition period and ready to be competing with the likes of Surrey at the top.”