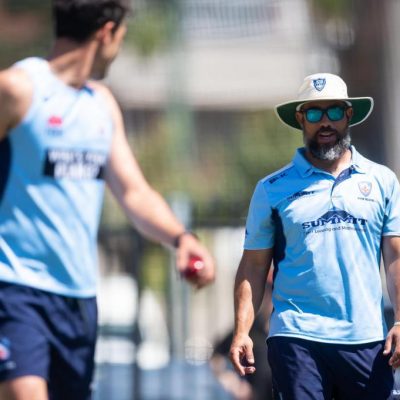 Vitae Sports take an in depth look at rising coach Andre Adams and his role in New South Wales and Sydney Sixers success.

You wouldn’t know it from his unassuming demeanour, but it has been quite the season for Sydney Sixers and New South Wales assistant coach Andre Adams.

Adams is a key part of the engine room of Australia’s double winning act of the Sixers and Blues who took home the Big Bash and Sheffield Shield titles this year.

For those who know or have worked with the 44-year-old Kiwi, that success will be no surprise. He has a quiet persona around the dressing room, but doesn’t need to demand respect to command it from his peers.

Ever the professional, and always willing to give help and advice, he knows what characteristics make winning sides – although if you put yourself before the team you can expect short change.

Starting in 1997, the skilful seam-bowler and hard-hitting lower-order batsman enjoyed an extremely successful 17-year playing career, taking 692 first-class wickets at 23.95 and well over 1,000 in all formats. Throw in 4,540 first-class runs at an average of 21.31 and you have a player every team would want.

However, that is only part of Adams’ story. His influence off the pitch, his love for the game and his professionalism gave him the edge.

After Adams’ brilliant eight-year spell at Nottinghamshire, where he was the driving force behind their 2010 Championship title with 68 wickets at 22.17, Notts Director of Cricket Mick Newell said: “From a Notts perspective, he’s the best bowler since the likes of Richard Hadlee and Franklyn Stephenson in terms of the level of impact on the team in the county game. He was a terrific role model to the younger bowlers.”

Just one year after Adams’ arrival at Trent Bridge, a struggling Stuart Broad attributed the turn-around in his international career to Adams and Newell, praising them for ‘rectifying his flaws’.

That’s quite an accolade from a player to a coach, quite another thing from one player to another.

A short spell at Hampshire was the swansong before retirement in 2015. Not one for fanfare or self-promotion, Adams headed back home to Auckland. He was their leading wicket-taker of all-time, but returned to coach the next generation. Inevitably, by 2018, he caught the attention of New South Wales and took on the role of Head Bowling coach in Sydney also linking up with the Sixers.

The wheels were put in motion and, along with Head Coaches Phil Jaques (NSW), and Greg Shippherd (Sixers), he helped both teams to victory this year. The Blues were named Sheffield Shield champions after finishing a whopping 12 points clear in the table, before the season was cut short due to coronavirus, and the Sixers clinched the Big Bash with victory over Melbourne Stars.

He says the Sixers’ success was the result of hard work, determination and dealing with pressure after showing potential the previous year.

He explained: “We’ve certainly shifted the focus to performance this year. Last season was great and showed plenty of glimpses that the group has the ability to win games.  But that also came with the frustration of being knocked out during the elimination phase.

“This year, some key aspects around staying calm and connected played a huge role in how we approached the season.

“The BBL is highly competitive as you would expect. The nature of the smaller number of teams (compared to IPL) means competition is fierce and there are more chances to study the opposition. It’s certainly a stronger competition than the New Zealand equivalent and it’s been a while since I played in the UK so I can’t comment on how it’s placed.”

Talking of the UK, he says his time as a player there influenced him on and off the pitch. He explained: “I look back on my time in County Cricket very fondly. Three seasons with Essex, eight wonderful years at Nottinghamshire and a brief stint with Hampshire.

“County Cricket offered me the opportunity to play alongside some England greats and the chance to help pave the way for future New Zealanders to play in the UK also.

“I think the biggest effect on me was the amount of great friends we made along the way. Living in another country half the year helped make our boys more rounded as people and they were afforded opportunities and experiences most people wouldn’t get.”

So, could we see him back at some stage? He added: “I would love to return to England one day but for now I’m based in Sydney with the NSW Blues and loving it.”

Vitae Sports
We can maximise your potential to play year-round on the worlds greatest cricketing stages. We represent players and coaches and work with a global network of cricket experts to identify opportunities for our clients.
Facebook Twitter Youtube Instagram