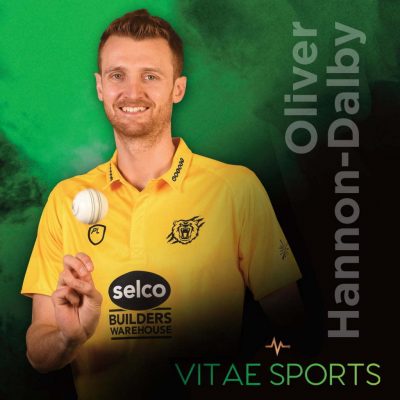 Bears seamer Oli Hannon-Dalby discusses how he is keeping busy during lockdown and his Warwickshire hopes for the future.

Following the government’s recent announcements in relation to the easing of COVID-19 lockdown in England, it’s possible that we will have some competitive sport again in the country from June 1.

In an ideal world, if the pandemic never happened, the 2020 cricket season would be well underway by now. We’d have seen centuries, ducks, drops, wickets and incredible catches – but, as we know, that’s not been the case.

Although the season hasn’t started as planned, there’s been no let up for the professionals that would’ve been in action. They’ve been taking part in kitchen workouts, living room training sessions and more; and it’s no different for Warwickshire fast bowler Oliver Hannon-Dalby.

“Everything has changed” he said, speaking exclusively to Vitae Sports. “We would’ve been playing cricket right now.

“The team at Warwickshire have done a great job, and we’ve all got pretty good training programs that we can all do at home – do in our gardens, do in our front rooms – which need relatively little kit. I was surprised that I can do a tough session in the garden that tires me out!

“We’ve obviously got to keep fit, but we’re not doing any cricket whatsoever – being able to bat and bowl isn’t really an option, which is a bit of a shame.”

As well as keeping fit, players have had to keep themselves entertained whilst, essentially, off work – and Hannon-Dalby has been making the most of his time.

“I’m trying to do a few coaching badges, so I’ve got a bit of work to be doing with that” he said.

“I’m doing an online course which is helping out with the coaching stuff, then I suppose it’s just like everyone in the country! I’m reading a few books, using my one hour of exercise a day, that sort of thing.

“I’ve got a dog, so he’s getting his socks walked off! But I’ve been doing a few quizzes on Zoom – that seems to be the thing to do at the moment – just hammering away with that sort of thing.”

Hannon-Dalby insisted Warwickshire, who were well underway with their preparation for another season in Division One of the County Championship, have been brilliant, too.

“We got back from pre-season tour and it was evident we weren’t going to be going into the ground” said the seamer.

“Since then, the fitness team and the medical department have been great putting out these programs.

“We have a Zoom meeting once a week just to keep in touch with one another which is great, just to see the lads and have a bit of banter; it’s been really good actually.”

Although Warwickshire remain in Division One, they narrowly avoided relegation last season after a tough campaign. Had the normal number of teams been relegated – two rather than one, which was decided in order to adjust the number of teams in the divisions – the overall outcome of their season could have been very different.

“Last season was a tough season for us” admitted Hannon-Dalby, who has been with the Bears since 2013.

“We had loads of injuries, which is always tough for a side, but what was brilliant was that those injuries allowed all the young lads played Championship cricket.

“The likes of Rob Yates, people like that, had exceptional years and took big strides forward, so it was going to be a really exciting year (this season).

England’s internationals, who have seen both their visit to Sri Lanka and the visit of West Indies postponed because of the pandemic, are due to return to ‘proper’ training next week. Other professionals are set to start again two weeks later.

“There are stories flying around about environments for test cricket and I think probably rightly so, given the money international cricket generates” said Hannon-Dalby.

“It has to take precedence just to get some cricket on television screens. What county cricket will get played, I have no idea.

“Going into Championship cricket without training much would be very tough. I imagine the priority at the minute might be T20 given the crowds that come in and the money T20 generates on television.”

The ECB have confirmed there will be no cricket in England or Wales before July 1, and, right now, it’s also unclear what sort of play we will see this season.

Hannon-Dalby is praying for some Championship cricket, though.

“I hope we play some County Championship cricket” he said. “What sort of competition we could have, I don’t know.

“I would imagine the integrity of the competition might not be there in terms of getting a proper competitive County Championship cricket season. I can’t see it happening properly.

“If we played local teams at the end of the summer and we played, say, Worcester, Northants and Derby, in a little round robin, that would be a nice thing to do. But there are a lot more important things to get sorted before that happens.

It’s unclear what changes will be made to the game when cricket does return. There will certainly be no crowds, but in terms of extra fielding restrictions, the ball, and more, everything is still up in the air.

“If the West Indies come over in July, there’s talk of it being a bio secure environment” Hannon-Dalby added.

“One of the biggest issues is probably the ball. If you’ve got people spitting, sweating and then grabbing the ball, and then Joe Root is stood at slip catching it, how do you isolate the ball?

“That’s probably one of the big issues. If you can answer that question, you are a smarter man than me!

“It might be the case that we train a lot before we can play because of reasons such as passing the ball to each other and bio secure environments. That’s quite hard to organise, but me having a net with my own ball and three other teammates is relatively easy to organise. It could be that we might not be able to play games until August or September.

When things do get going – in whatever form – Hannon-Dalby is more than ready to go.

He played plenty of games last season for Warwickshire, and was one of the first picks to take the new ball County Championship games.

This season, he wants to carry on his fine form – when, and if, we get the season.

“I was lucky because I didn’t have many injuries last year” he said.

“I played quite a lot and it was really nice to play a lot of Championship Cricket in particular. And nice to play a big part in staying up, too, so I was hoping to do the same, really.

“I really enjoyed the fact that I took the ball for the majority of last year, opening the bowling for Wawrickshire, and that was something that I was hoping to continue doing and help lead that attack.

“Obviously the situation has changed, but, if and when we do get out there, I will be looking to do the same if possible; looking to kick on from what I did last year, get that new ball and help Warwickshire finish near the top of the table.”

We might get a 2020 cricket season, we might not. If we do, though, things will be very different – it’ll be well worth keeping an eye on Oliver Hannon-Dalby, too.